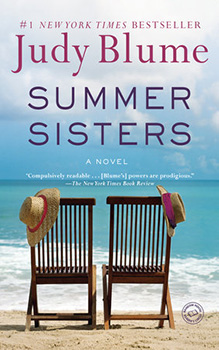 Summer Sisters unfolds over almost twenty summers in the lives of two young women – from 1977 when they’re twelve to 1995 when they celebrate their thirtieth birthdays. There’s a love story at the center, and the story of a friendship more intense and longer lasting than many love affairs.

SUMMER. Summer is my season, the season I wait for the rest of the year. You can live a lifetime in a summer, especially when you’re young.

PSYCHO HOUSE. We were living in Santa Fe in 1983 when my husband, George, suggested we go away for the summer, to Nantucket or Martha’s Vineyard. I’d never even heard of the Vineyard. It sounded exotic, exciting. I was always ready to pack up and go in those days. Anywhere, anytime. The house we rented, sight unseen, was an old rundown place hidden in the woods, surrounded by tall pine trees. Unless you looked out the windows of the second floor you might not have known it was on the water. My stepdaughter, Amanda, who was fifteen that summer, named it Psycho House.

IDEAS. I came to the Vineyard with no knowledge of its history, no understanding of its social structure and made no friends. For ten weeks I saw almost no one except my family. What I remember best from that summer is the scent of pine needles, fresh fish on the grill, sailing with George, and load after load of laundry. (Someone once asked me how I spent my summer and I answered, Doing laundry).

Every afternoon I’d row the dinghy around the pond, often out to the jetty where it opens to the Sound. Alone on the water, with time to think, the idea for Summer Sisters first came to me. It was just a vague idea then – two young women from very different families in Santa Fe spend a series of summers on the Vineyard, one the guest of the other’s family.

That was it. No more. The idea stayed in my head for ten years before I actually began to write anything down. For a long time I thought of the book as Caitlin Summers and I thought the characters might go from age twelve to maybe seventeen. I never guessed it would take almost twenty years to tell their story or that so many adult characters would be involved, jumping in and telling the story from their points of view.

But when I actually began to write it was a wedding scene that came to me, a wedding with one summer sister marrying the first love of the other’s.

SALLY’S CAMP. Fast forward to 1993. By then we had our own place on the Vineyard, on the same pond, surrounded by pine trees, looking out to sea. Our property came with three cabins. I used the smallest one as my writing studio.

Not much bigger than a doll’s house, there was just enough room for a bed (which came in handy) and a picnic table we found at a yard sale that I used as my desk.

The woman who sold us the place had lived there year-round for thirty years and she’d given each cabin a name. Mine was called Cuckoo and I never changed it. My grown children thought it a good fit. There, looking out to sea, is where I wrote the first few drafts and, in the summer of 1997, the final draft of Summer Sisters. (The book went through so many drafts I’ve lost count. Some births are more difficult than others.)

Click here to view Judy’s June 2020 talk about what summer means to her, traveling through stories, and the book that almost broke her heart to write.

“As warm as a summer breeze blowing through your hair, as nostalgic as James Taylor singing ‘How Sweet It Is.’ You remember. So does Judy Blume. How sweet it was.”

Judy’s Anxiety Diary
From Judy’s May 1998 book tour for the hardcover publication of Summer Sisters.