Friend or Fiend? with the Pain & the Great One 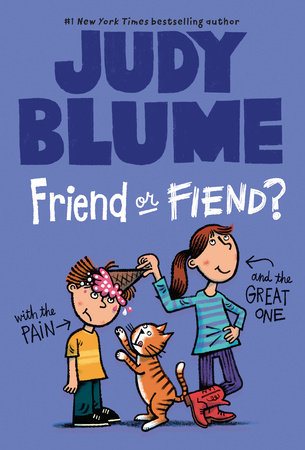 What’s the difference between a friend and a fiend? Those sassy siblings, the Pain and the Great One, are about to find out in seven new stories. Jake is so embarrassed by a reading circle blunder, he vows never to speak in class again. Abigail believes she can no longer trust one of her best friends. Their teenage cousins have turned into fiends. And on the perfect snow day, someone jumps on Jake and pushes his face in the snow. Not fun! In fact, fiendish. Jake and Abigail plan a birthday party to celebrate the date when Fluzzy first became part of their family. But only Fluzzy knows what really happened on that dark and stormy night — and will he or won’t he tell?

When I was in first grade I made a mistake in reading group. I read that Dick and Jane found a truck in the attic, when they really found a trunk. If only I’d studied the picture more carefully I could have figured it out. But I didn’t. And everyone laughed at my mistake. I wanted to disappear. That’s where I got the idea for the first story in Friend or Fiend? Jake doesn’t even know what a fiend is, when he misreads friend. And when he finds out he feels even worse.

While I never had cousins like William and Sierra, I did get car sick like Jake. And one time, when I was a teenager, I was chased by a goose. That was scary!

Another story comes from a friend who told me when she and her brother were growing up, she got sooo angry at him she smushed an ice cream cone against his forehead. Guess what he looked like then? Here’s a hint. The name of the story is Unicorn. And that’s exactly what Abigail does to Jake. But something good comes out of it — something really, really good.

I had fun writing this book, especially the parts about Fluzzy. Our first cat was a lot like Fluzzy. She came to our house on a dark and stormy night and never left. We never found out where she came from. But I’ll bet she had a secret, just like Fluzzy.

James Stevenson’s illustrations for Friend or Fiend? are laugh out loud funny. Thanks, Jim!

I didn’t even have to think about it!

Emma and Ben Valentine are the children of Amy Adelson, Randy’s longtime friend, the one who told me about smushing that ice cream cone. They spent a day with us on Tashmoo Pond every summer. We always looked forward to seeing this lively duo.

“… Blume’s singular ability to portray the minutiae of a child’s everyday life with humor is perfectly complemented by Stevenson’s occasional line drawings that extend the story’s charm and fully shaped characters. Fluzzy the cat once again stretches his literary whiskers and contributes the last chapter. ”
–Booklist