Going, Going, Gone! with the Pain & the Great One 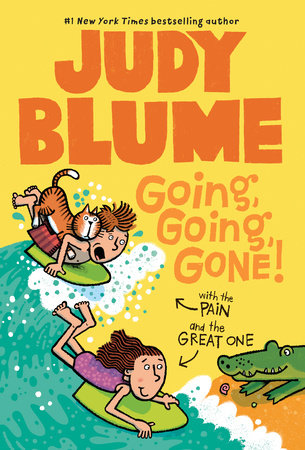 The Pain and the Great One are going places! In seven comical new stories, Jake and Abigail are on the move. A day at the beach finds the waves perfect for Boogie boarding but only one of them thinks riding in to shore is the best fun ever. At the county fair their ideas about which fabulous rides to go on are very different. Whether it’s a trip to the emergency room, or a visit to Grandpa Pete’s — whether it’s pussy willows in the wrong place, or alligators where they belong — these spunky siblings share their adventures in equally sassy voices. James Stevenson’s lively, action-packed illustrations make this a perfect book for reading alone or sharing — at home, at school, or on the go!

This is the third chapter book in the series. I had fun with this one! Two of the stories were inspired by my grandson Elliot who only wanted to ride the Gravitron at the “Ag Fair” on Martha’s Vineyard. He’d go as many times as I’d let him. I was really curious about the ride and asked the guy in charge to let me see the inside. But I wasn’t brave enough to actually take the ride. Like Aunt Diana, in the story, I get vertigo from amusement park rides. Elliot was disappointed in me but that didn’t stop him!

Jake and Abigail’s visit to Grandpa Pete’s was inspired by a trip I took with George. We spent a week camping out and canoeing in the Florida Everglades. The night before we started I read a book about snakes and alligators and how they can’t bite through leather (or maybe it was just one of them that can’t bite through leather). Either way I decided I’d wear my leather boots the whole time. Problem was, they were my city boots. I had them with me because I’d been at a convention the week before. For seven days and seven nights I never took off my boots. Nothing George could say would get me to change my mind. I slept in my boots, I portaged through thigh high muck in them, I….well, you get the idea. At the end of the seven days my boots were so smelly and disgusting there was no hope for them. Abigail’s favorite cowboy boots meet a similar fate. Oh — we did get to see alligators! And so do Jake and Abigail.

I’m crazy for James Stevenson’s funny illustrations in this book. He gave Grandpa Pete a walrus moustache, just like his.

They’re on the go in every story!

Kamu and Miranda are the grandchildren of my friend, Mary. They’re not ready to read yet but before you know it, they will be.

“…as always, Blume gets right to the hearts of her characters, revealing their fears, their resentments and their affection for each other. Stevenson’s grey-washed cartoon illustrations enliven the pages. Each chapter can stand on its own, making this particularly accessible for the struggling reader. This is the third of a projected quartet of chapter books, sure to be welcomed as enthusiastically as its predecessors were. (Fiction. 6-9)“
–Kirkus Reviews