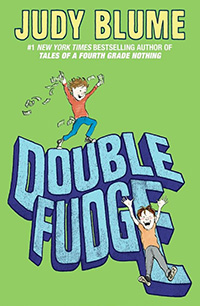 Any fan of Fudge knows that he never does anything halfway. And so it should come as no surprise that when he discovers the value of money, he goes whole hog, making his own “Fudge Bucks,” and thumbing through catalogs to choose his birthday presents years in advance. His older brother Peter, who’s just starting 7th grade, finds it all highly embarrassing, as usual. A wild and wacky beginning to a new school year.

I never expected to write another Fudge book. So how come I did? I have a really good reason — my grandson, Elliot. Guess which character of mine was his favorite? You got it – Fudge! When Elliot was younger we used to play The Fudge Game, a game he invented, where I had to be Fudge and he got to be Peter. This game drove everyone in the family crazy except Elliot. He starting asking for another Fudge book then. I told him, “When and if I ever get another idea….” I feel really lucky that just when I least expected it, an idea came to me. It had to do with Elliot’s belief that if you needed money all you had to do was go to the ATM.

With two Farley Drexels, what else?

This book is definitely for Elliot!

“As usual, Blume’s humor and pitch-perfect ear for sibling rivalry and family dynamics will have readers giggling with recognition. Newcomers and Fudge fans alike will savor this installment in the well-loved series.”