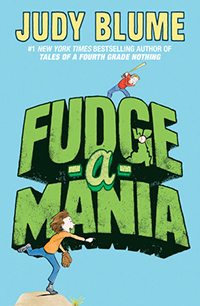 Peter Hatcher’s summer is not looking good. First of all, Peter’s brother Fudge—the five-year-old human hurricane–has a plan: to marry Peter’s sworn enemy, Sheila Tubman. Disgusting! Could anything be worse? Yes! Because Peter’s parents have decided to rent a summer house next door to the Tubman’s. Which means Peter will be stuck with Fudge and Sheila the Cootie Queen for three whole weeks!

Another seven years passed and Fudge’s fans were begging again. But I didn’t have an idea until George (my husband) and I rented a place in Southwest Harbor, Maine during the summer of 1989. As soon as we pulled up to the old shingled house and I saw the rope swing hanging from the tree, I imagined Sheila Tubman swinging on it and the idea came to me—Peter’s family and Sheila’s family would spend their summer vacation sharing a house in Maine. We had recently made a movie based on Otherwise Known as Sheila the Great (Larry directed) which made me itchy to write about Sheila again. This would be a reunion book. I’d bring the major characters from all the Fudge books together and that would be it—I’d never write about them again!

It was a cold, damp summer, a disappointment to us but as it turned out, a great summer for writing. I set the book in Southwest Harbor and had fun using the names of local shops and characters. There really was a guy everyone called “Bicycle Bob.” I bought a bike from him that summer. We grocery shopped at Sawyer’s Market on Main Street, and spent time browsing at Oz Books, a children’s book store (though the owner wasn’t called Dorothy).

George came up with the title for this book but he meant it to be “Fudge-a-Maine-ia.” Somewhere along the way it became more “Mania” than “Maine-ia.”

I dedicated the book to George—who took me to Maine, and was there to encourage me every day, and of course, to Larry—the original Fudge, who has swallowed more than one fly while biking. When the book came out I told everyone this was it, not to expect another Fudge book, ever!

“[A] fast-pitched, funny novel …. The colorful antics of all members of the two families makes reading these pages a treat.”