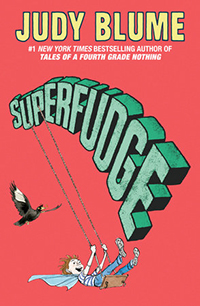 Nothing is easy for 11 year old Peter Hatcher. It’s hard enough to have an impossible little brother like Fudge, but now there’s a new baby coming. And if this baby is anything like Fudge, that’s it – Peter is moving out! Just when he thinks it can’t get any worse, Peter finds out that Fudge will be in kindergarten at the same school where he’ll be in 6th grade!

Kids had been writing for years asking for another book about Fudge and I always answered,”Yes, when and if I ever get another idea.” I remember exactly where I was when the idea finally came to me—in the shower, covered with soap and shampoo. And the idea seemed so simple I couldn’t believe it had taken seven years. I would give the Hatchers a new baby. Not only that, but they would leave the city for a year, moving to Princeton, New Jersey (a town I had lived in with my children for one school semester). The thing about funny books is, they have to spill out spontaneously, or they don’t work. (At least that’s how it is with me) Unlike a novel, which can take me three years and up to twenty drafts, Fudge books either come or they don’t. Maybe that’s why I write so few of them.

Fudge is fascinated by Superman. When he calls, “It’s a bird…it’s a plane…” I wanted him to say,”it’s Superfudge!” But I couldn’t get permission. Still, I knew Fudge thought of himself that way and I knew I had my title.

Once again, the book is dedicated to Larry, without whom there would be no Fudge, and to all my readers who asked for another book about him.

“A genuinely funny story…dealing with the kinks and knots of modern family life.”