These links do not reside here at JudyBlume.com. They will open in a separate window.

Morning Edition: Renee Montague talks with Judy Blume about how as a twenty-something year old woman with two young children she started to write and how her own childhood inspired her fiction writing.
December 25, 2008

Conversation with host Kerri Miller recorded before a live audience at the Fitzgerald Theater. Judy talks about her new series of four books “The Pain & The Great One,” aimed at ages 5 to 7.
June 16, 2008

Kurt Anderson, of Studio 360, interviews Zarife Öztürk who works at a publishing house in Istanbul. A few years ago Öztürk made it her mission to translate Judy Blume’s children’s books into Turkish. Öztürk fell in love with Blume’s books when she was 10 years old, and about to attend school in America for the first time.
April 11, 2008

With host Peter Sagal. Judy Blume plays a game called, “Judy Blume! Come on Down!” answering questions about The Price is Right from a new book about the show.
September 1, 2007

NPR’s Michelle Norris talks with Judy Blume, author of books for children and adults. She has been named this year’s winner of the National Book Foundation Medal for Distinguished Contributions to American Letters.
September 15, 2004 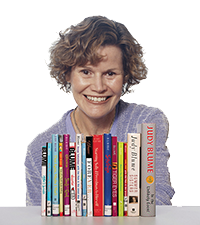 In her second Wired For Books appearance, Judy returns to talk with Don Swaim about KIDS Fund, a grant program founded in 1981 that supports children and adolescent programs dealing with a multitude of topics. All of the proceeds of her latest book at the time, Letters to Judy: What Your Kids Wish They Could Tell You, go to the fund. The book is a combination of letters from children and Blume’s reactions.
April 1986

Don Swaim interviews Judy about the wisdom found within the pages of children’s stories that can benefit both adults and children alike. Growing up Judy wanted to read books that showed feelings and problems. She discusses wanting to write about characters she could identify with.
February 1984